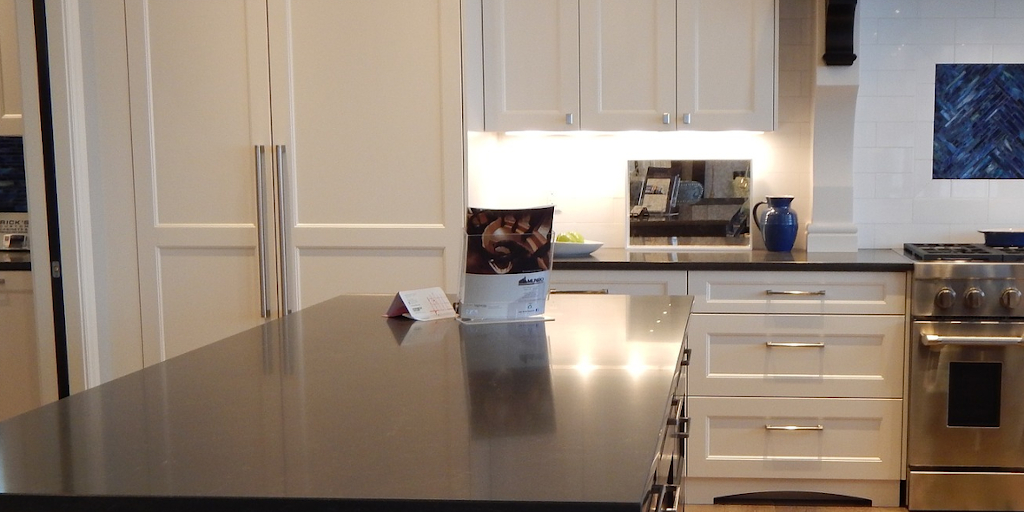 In the world of kitchen countertops, bathroom surfaces including vanities, showers, and wall tiles, engineered quartz is a popular choice. Yet, some may not be familiar with exactly what this material is, what is needed to fabricate quartz, or how to maintain and care for it. In this post, we will consider those topics and even explore some others. Let’s get right into the information about engineered quartz surfaces.

How Quartz Is Engineered

It might surprise some people to learn that quartz countertops are not the same type of material as granite and marble. Rather, quartz surfaces are engineered and produced by manufacturers using processes designed to create slabs. It is surprising to some because they may have heard the material referred to as “natural stone”. Note what one article from usenaturalstone.org said regarding this manner of referencing:

From my perspective as a geologist and a professional admirer of rocks, I can easily appreciate the attempt to align a manmade product with a natural one. We can all agree that natural stone is awesome. But manmade quartz isn’t natural stone.

So, if quartz is not natural stone, then what is it? Well, quartz surfaces are a mixture of raw minerals and man made resins and pigments. These ingredients are mixed using a proprietary recipe and then formed into a slab. The mixture percentages vary, but most of them follow a general ratio.

Engineered quartz possesses a number of characteristics that are appealing to consumers. In fact, many of these qualities are used as selling points for the material.

Being a man made material, quartz (the surface) can be fashioned to coordinate with just about any color. This means that engineered quartz is available in a wide array of colors. Additionally, manufacturers add visual texture to slabs, making them resemble natural stone. Another trait of engineered quartz is it’s a very hard material. This characteristic yields some very desirable benefits that we will look at closer in a bit.

One of the more prominent traits of engineered stone is that it is non-porous. Unlike natural stone which has pores and allows the material to absorb liquid that come into contact with the surface, quartz does not absorb liquids. This too translates into some positive benefits as we will see later in the post.

One of the key things to know about quartz when it comes to fabricating the material is that choosing tools carefully is important. Because of this, tool suppliers and tool manufacturers produce all sorts of tools made for working with and fabricating engineered quartz. Some of these include diamond blades for cutting quartz and quartz polishing pads. Each of the blades for cutting quartz offers specific design features and professionals usually have a preference.

Caring for engineered quartz is pretty simple. In fact, most quartz manufacturers state that only warm soapy water is enough to keep the surface clean. There are however specially formulated cleaners that are designed to clean quartz.

Does that mean that quartz is not susceptible to stains? No. Just because a material is easy to care for does not make it invulnerable. For example, manufacturers of quartz surfaces often include keeping the surface dry as part of the care guidelines. This is because, substances that dry on the surface of engineered quartz can leave residue that requires specific treatment to remove.

The benefits of engineered quartz are easy to grasp. In fact, you may have already picked up on some of these as you read this post. But, we will consider them here. One nice feature of quartz is that it is a hard material that is scratch resistant. This means that the material looks new longer. Scratches (even minor ones) can hurt the appearance of a quartz countertop.

Another advantage of quartz is that it does not absorb liquids. Additionally, if a material readily absorbs liquids it can be easily stained by various household substances. Some of the more common stain-causers include:

Since quartz is non-porous the liquids stay on the surface and can be easier to treat since they are not inside the pores of the material.

Even though quartz is a material that has some advantages, it is not indestructible. In fact, just like all other materials, it has its disadvantages. For example, the resins in the material react with chemicals. This means that some household cleaners and other chemicals cannot be used on quartz at all. So it is imperative that the manufacturer’s guidelines for treating stains and spills are followed closely.

Another disadvantage of quartz is that it has a lower tolerance for heat. This will no doubt affect the fabrication process. Dry polishing or using polishing pads that are not designed specifically for quartz is potentially hazardous. In fact, any tool that generates high temperatures during fabrication will burn the material and discolor it. These disadvantages of course have solutions, but it is important to know about them before a project is ruined.

In the end, quartz is a material like the others in many respects. It is unique and has its place in the industry. Furthermore, just like other materials it possesses advantages and disadvantages. Hence, quartz has specific care and maintenance guidelines that make it easier to care for if followed properly. Whether you decide to work with quartz, it helps to have a good idea of what to expect if that is your decision.

Other Info of Interest: